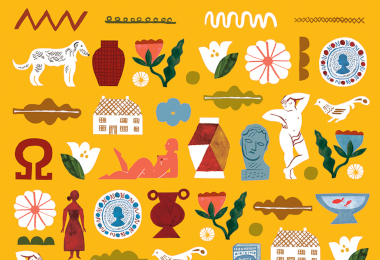 An accessible audio described informal visit to ‘Bloomsbury: A Collective’ for anyone experiencing sight loss, to find out more about these fascinating characters and the art they created.

The Bloomsbury Group was a group of artistic and intellectual friends. They came of age just as the conservative Victorian era of the 19th century was ending. As a loose and changing mix of people they were searching for new ways of thinking, living and loving. They initially met in the Bloomsbury district of London at the family home of the siblings Vanessa Bell, Virginia Woolf, and Thoby and Adrian Stephen.

An extremely privileged group, they were closely connected to British ‘high society’. This wealth and class gave them freedom to live as they desired and time to discuss the philosophies they lived by. Many of them formed similar ideas around feminism, socialism, pacifism and sexuality while studying at the Universities of Cambridge or Kings College London. They considered their art making during the First World War as an act of protest against the conflict. The art, literature and ideas generated by the Bloomsbury Group would have an enormous influence on the rest of the twentieth century.

This exhibition includes works from The Courtauld’s collection and Ulster Museum in order to take an introductory look at the Bloomsbury Group, specifically three central artists within it – Vanessa Bell, Roger Fry and Duncan Grant.

This exhibition is part of an ongoing collaboration between The Courtauld and Ulster Museum.

Please contact Sharon.mckibbin@nmni.com to book your place to this free event.